I know they say ‘joy comes in the morning’, but you would never understand the depth of that saying if you have not being in a certain kind of situation. Only then would you appreciate it (somehow). It all started as a brilliant idea that came to me on a beautiful Sunday morning. That morning, I had a craving to eat Akara (a local bean product). I took a walk down the road to where a young woman who had the kind of smile that lights up the streets sold Akara. She had a baby strapped on her back with a worn out wrapper and there was smoke from the firewood which was choking and I observed that the baby just could not stop coughing. I was tempted to take my Akara and head home but on a second thought,

I asked the woman if she had taken her baby for all the routine immunization like DPT, BCG among others, and to my greatest surprised she asked me “ what is immunization”.

I asked the woman if she had taken her baby for all the routine immunization like DPT, BCG among others, and to my greatest surprised she asked me “ what is immunization”. I asked again if she had heard of pneumonia and she just stared, confused as if I spoke Swahili! Click! I decide then that it was time to take the bull by the horn.

And I did take it by the horn! (Literally). Of course I had a lot of ideas but this one seemed to be the real deal and if planned properly, Vaccine Network for Disease Control (my NGO) could pull it off. Though the idea was obviously a good one, I had quite a number of things to put in place and consider, but there was no stopping me as always. I got in touch with Dr Chizoba Wonodi. She was really fired up also she said, “let us develop something that will educate the rural dweller in a way that is interesting and unusual” hmmm…. I know no one likes the way people die from various diseases and worst of all, the ones that can be prevented. But the question is, what have you done in your capacity to tackle these issues which affect men, women, young and old and the worst of it all those cute little things, children! How can we let our future be bleak? Yes, the children are the future. They are the ones who would be there to change the world when we are old and maybe cranky or even dead! They are the ones who would make sure everything turns out fine I have kids. I love kids. I look at my kids and I feel love. I see them now acting all grownup and wish they would remain my adorable little babies. 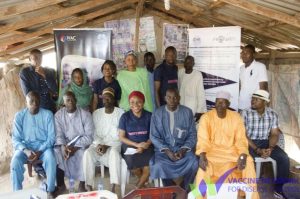 Imagine what that feels like and imagine what it would feel like if they were snatched by the cold hands of death by a disease you knew you would have easily prevented probably by vaccination or another! Pretty sad, right?! For the educated and enlightened parents, this would be unforgivable, though it might never happen. For the uneducated and naïve parents, well… ignorance is the worst enemy. November 12th is a day mapped out to mark Pneumonia Day around the world. It is a day set aside to create awareness on the dangers of pneumonia infection, symptoms, prevention and cure. It brings together all the stakeholders to join against the fight against this preventable disease. Bearing in mind that most people find health issues boring, I decided to organize an event that would be extremely exciting yet educative, conveying the exact message but in an unconventional manner. I called Dr Wonodi for ideas, we rubbed minds and in a flash it hit us; A fashion show using the children that are most likely to catch the disease as models. 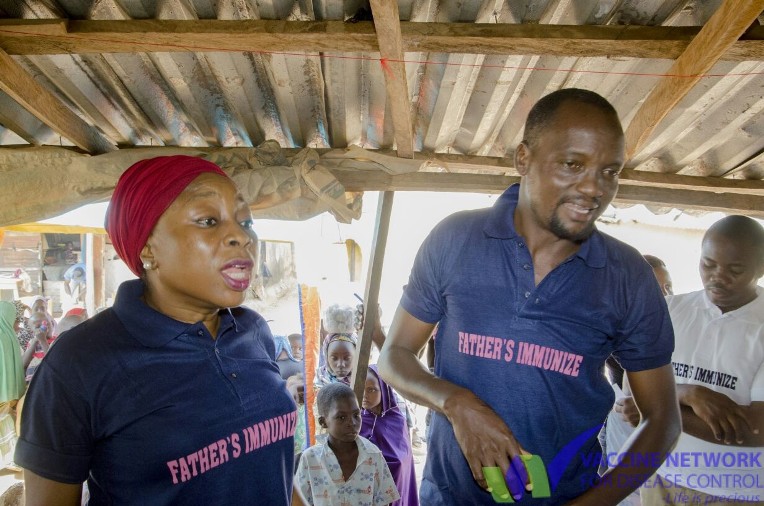 Finding a title took a while. At first, it was ‘Pneumonia and you’, then it became ‘Why Pneumonia’ (kind of hilarious to me because to me it sounded more like a tribute to some dead icon’, it went on and on but I finally settled for” Fashion for Pneumonia” which I adapted from the Fashion for Health segment of my Adopt a Settlement Campaign. With the task of finding a suitable name for the event out of my hair, I was faced with another task. Funds! But yet again, I was in luck. Annually, the International Vaccine Access Center at the John Hopkins Hospital, Maryland gives out small grants of not more than a $10,000 to Nonprofit Organizations for small Projects like mine. I had partnered with them for a Journalistic Advocacy on the introduction of Pneumonia vaccine as an intervention to decrease child mortality the previous year. Since I had a project already planned out, I applied. A week later, I got a feedback that I had scaled from the first stage of the grant to the second. Within a month, everything was in place. Yes, I got the grant! I put my staff to work immediately as I did not want excuses and I always looked forward to a successful event. 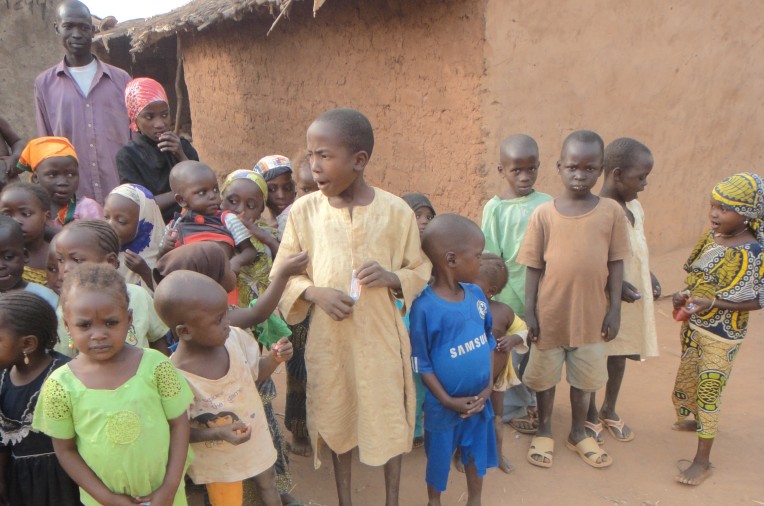 First was the decision of a location that is the community we would use to showcase the faces of unimmunized children, a community where our services would be needed and appreciated. Damangaza Hausa Settlement, a little settlement I had been to, to support the Abuja Municipal Area Council (AMAC) in their bid to immunize children against measles and polio was my first choice. I believed that since they had not immunized their children against diseases like measles and polio, they would know nothing on the dangers of Pneumonia (that is if they have heard of it). I groomed the kids and also trained them to strut the catwalk. Gosa Village in Abuja was another of my choice. My meeting with the village head went so well, it was exciting. I gathered children from the Gishiri Orphanage in Abuja to perform a heartwarming song by TY Bello titled ‘We are the future’ (I love that Song! Can’t get it out of my head!).If I do not involve my kids, who would I involve? But being a nice lady I am (wink), I asked the management of my kids school, Tender Years School, to prepare a play “Who is to Blame” to present on that day. Who is to blame for the deaths from Pneumonia? Me? You? Parents? The community leaders? Kids from various neighborhoods were to choreograph a dance to “Fight against Pneumonia” Unfortunately; it didn’t go as easy as I made it to sound. I was faced with a lot of challenges that at some point.

Unfortunately; it didn’t go as easy as I made it to sound. I was faced with a lot of challenges that at some point.I thought I was going to give up. For a community that was not exposed, Damangaza Hausa Settlement knew how to be difficult. For easy communication, I had to buy a phone for the Imam (religious leader) of the village who seemed to be the outspoken one. No, I am not Mother Christmas but if I did not, I would not have being able to get through to them. What did they care? They had never seen anyone die of pneumonia and even if someone did, how would they know it was it? Even though I bought the phone, it was still hard gaining their trust as a lot of convincing had to be done. Some of the villagers were scared that we were cultist who came to use them for blood money; some believed that we were kidnappers, others simply kept their distance. But they was no stopping me.I had good intentions so I had to fight to the end. A day to the event, the Imam approached me, telling me that he and his children would not be able to attend the event (he had about 3 or 4 children in the group of 14 children we chose after much practice), pointing out that if I gave him the sum of #20,000, he would cancel his trip.Can u beat that? If there was any word worse than mad, that’s what I felt!

In my anger, I told him to do as he pleased because I was not ready to part with another dime (I was already short on cash and was not sure how I was going to complete some payments all thanks to some unbudgeted costs like PHONES).To fit the clothes donated by some good Samaritans for the catwalk was another case. The Muslim culture restricted them from taking off their clothes in public, so to test another was a problem. Tempers were flying up and down. As the children had never being to a fashion show or a stage before, to adapt to the stage was tough on them. It became obvious to me that my kids school might disappoint me, but as the smart woman I am, I immediately made a plan B. I gathered my neighbors’ kids and gave them the script. The worst of them all was the Gosa Village. A week to the event, the Village Head travelled without informing me, leaving the villagers clueless. On the day of the event, it was as if things couldn’t get worse. The stage was not ready two hours after the proposed time for the beginning of the event. The public address system, the photographer, and the video man had not arrived neither had the projector and screen.

I was on the edge. When I taught I couldn’t handle anymore, things began to fall into place. The event was a huge success. At the end, all went well. All my suffering and sweat paid off. The joy of an amazing event was fulfilling and in a split second, I forgot all the trials and challenges I faced in the planning.As I sit back and recollect, I have come to realize that the end really does justifies the means. There were about 250 children in attendance including parents and policymakers. I cannot forget the question and answer segment where the kids showed that all they were taught was not in vain by asking intelligent and hilarious questions like; “if pneumonia is airborne and that deadly but still has a vaccine, why not spray the vaccine in the air so that people can inhale as well”. (laugh). The villagers realized the dangers faced if they neglected vaccination of their kids against pneumonia. Vaccine Network for Disease Control touched the lives of so many and a lot was learnt through our outreach. We are introducing our Support a Settlement Scheme where we encourage individuals, corporate bodies and the general public to adopt a settlement through immunization either financially or by innovatively monitoring the various settlement, assessing the progress on immunization process and giving feed back to Vaccine Network/ other interested NGOs/CSOs and the necessary government agencies. They just might never appreciate what has been done for them because Pneumonia and other preventable diseases cannot be seen since no one dies. To them, it means nothing. To us, it means something.